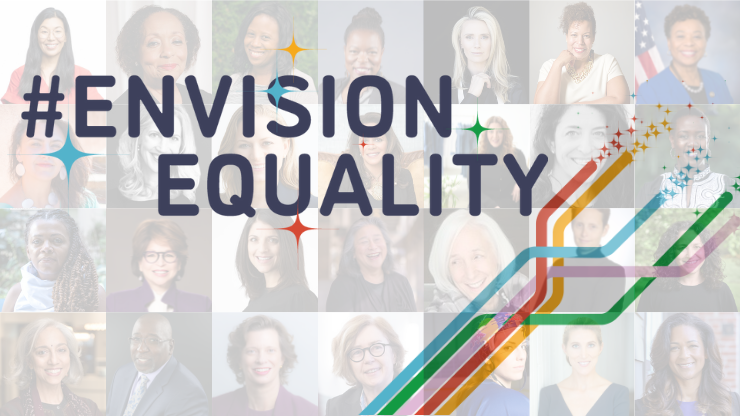 The world stands at a critical juncture. The last year and a half has shaken our society and exposed critical intersecting inequities around race, gender, class, and other marginalized groups. We have a unique opportunity to build a new world, one that places gender equality and justice at its core. To do this, we have to dismantle the systems that have upheld and perpetuated inequality and commit to the hard work of shifting and relinquishing power with humility and intention.

This moment calls for bold visions and diverse voices. Feminist.com co-created the Envision Equality project in hopes of connecting with a diverse group of dreamers and doers to amplify their visions of a gender-just future through a series of articles at Forbes.com and a digital campaign around #EnvisionEquality. We believe that we can’t be what we don’t ENVISION.

The inspiration behind the Envision Equality campaign was created in collaboration with the Global Center for Gender Equality at Stanford University, Marianne Schnall (Journalist and Founder of Feminist.com), the ERA Coalition and Fund for Women’s Equality.

Envision Equality is a two-part series of articles in Forbes, in which we reached out to a diverse and esteemed set of activists, visionaries, policy makers, academics, and other thought leaders cutting across sectors and industries and asked them to share their visions of what a gender-just world would look and feel like, and share what gives them hope and inspiration on the road to achieving it.

In this first installment of the #EnvisionEquality series, esteemed thought leaders across sectors share their visions of what a gender just future could hold, what gives them hope and how taking an intersectional approach is critical to achievement.

In Part 2 of the #EnvisionEquality series, activists, experts and thought leaders discuss the systems and paradigms that need to be reimagined in order to achieve equality, share what actions we can take to advance toward an intersectional, gender just world, and offer powerful advice to lawmakers looking to pass the Equal Rights Amendment.

V and Jamia joined journalist Marianne Schnall in a dynamic virtual fireside chat about what a truly inclusive and equitable world looks like and the actions we can take to achieve it. V and Jamia also shared their powerful insights on a broad range of issues including ending gender-based violence, intersectionality, the future of feminism, advice on activism, and more. Singer, filmmaker, and activist Taína Asili performed "We Are Rising," the powerful anthem she created for One Billion Rising, and remarks were also made by event co-hosts Sarah Henry and Carol Jenkins.

Envision Equality, in collaboration with the Maverick Collective by PSI, was honored to host inspiring visionary Anita Hill for the first in our virtual interactive event series. Anita joined journalist and Feminist.com founder Marianne Schnall in a virtual fireside chat about the timely themes in Hill’s new book Believing, as well as how we can envision and create a gender just future. Remarks were also made by event co-hosts Sarah Henry, Carol Jenkins and Mona Sinha.